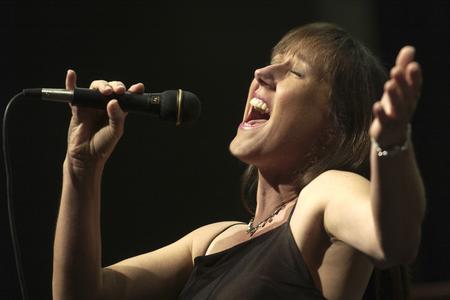 ​Music has always been a huge part of Janet’s life.  She first learned many of the jazz vocal standards as a child from her mother who loved to play the piano and sing the music of that era and who also directed musicals in the local playhouse.  She took piano lessons from her aunt and jazz harmony arranging from her high school music teacher, Bud Roberds.  This saturation in the musical world gave her a solid foundation for her future career.

Janet is said to be a “musician’s singer”.  She is one of the few singers in town who can easily change styles and own all of them.  She has worked singing jazz, big band, contemporary pop, rock, R&B, disco, country, gospel, show tunes, classical, renaissance, Sanskrit, and even Jewish traditional music.  Each one a very different sounding style and vocal production, yet when Janet sings them, she "brings it".  With this much versatility, she has come to be known as one of San Diego’s hardest-working and busiest singers.  She has led many of her own bands and vocal groups at numerous EVENTS and VENUES, as well as having performed with hundreds of MUSICIANS.  She has also TRAVELED extensively.  Her abilities in sight reading, her large vocal range, and  her versatility of styles have also given her recording opportunities in many STUDIOS which not only include her own recordings but also radio jingles, other peoples demos, and musical show debuts.

Church Position:  Music has always been a source of spiritual enrichment for Janet. She has always been inspired to sing where the music can touch people on a deeper level. Janet has sung at many different churches, eventually leading her to sing at the Unity Center in 1996. In 1998 she started a 75-voice choir and became the Music Director in 2001 where she sings, books guest artists, leads the choir, and leads the band, Soul Notes.  She feels blessed to have so many expressions of music in her life.

Music Business: As well as creating and leading her own bands and vocal groups, one of her most successful performing group achievements was her very popular Christmas caroling company, The Full Measure Carolers.  Since its inception in 1989, it grew from one quartet to over 15 quartets booking an average of 250 gigs during the holiday season with the most gigs in one season at 436 gigs within a 5-week span.  She sold this company in 2013.

Studio Work: Janet has recorded seven CDs of her own as well as the featured vocalist on two Big Band recordings, one of which was nominated for best jazz recording of the year (2019) by San Diego Music .  She has also recorded national radio jingles, international children's educational audio books and resources, pinball machine theme songs, video games, and other studio work for many projects.   She is currently working on her third Big Band CD recording with the Ira B. Liss Big Band Jazz Machine and at the same time working on a solo album of a compilation of her recordings from the other two big band albums.